Why Do People Go Solar?

People choose to go solar for a number of different reasons. Some of the more common reasons are:

-To save money. Over the long term, there is no greater payback!

-Those concerned with the rising cost of electricity

-The need for power in a remote location

Whatever the reason, harnessing the sun’s power is becoming a more popular and affordable source of clean renewable energy!

Do We Get Enough Sunshine For Solar In Southern Alberta?

Yes, we do! Historical solar radiation data provided by the Government of Alberta’s Agriculture and Rural Development indicates that Southern Alberta is a prime region for PV solar installations. Systems installed in this region will have the highest performance rates in Alberta. 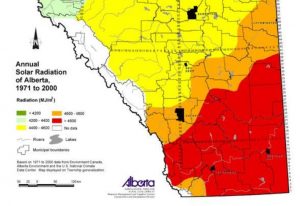 How Important Is Module Efficiency?

Occasionally, we hear complaints about solar not being worth it, because “modules are only 15-20% efficient.” And that’s true. They are. Solar modules can only convert 15-20% of the free sunlight that is available each day. What these people fail to realize, is that this measure of ‘efficiency’ doesn’t matter. What matters is output, and module output is measured in Watts.

The average solar module output ranges from 250W – 350W (Watts). We commonly install 260W modules on residential homes, as it provides the best cost per watt for our customers. Commercial applications are in the 310W – 315W range. Higher wattage modules are typically more expensive, though space constraints, or production needs may warrant the added cost.

Solar modules are rated either Tier 1, 2 or 3. Tier 1 modules are provided by the largest solar module manufacturers in the world. These corporations provide the highest quality product and warranty service due to their financial stability. Solar Optix recommends only installing Tier 1 modules.

Grid tied systems are installed using either micro inverters, string inverters, or a hybrid called optimization. Solar modules produce DC current, similar to a battery, but your home requires AC current. Micro inverters are mounted under each solar module and make this conversion on the roof. A string inverter gathers all of the DC current from each group or “string” of modules in one central location (typically on an outside wall or near the AC panel) and makes the conversion there.

The hybrid system with optimization consists of a central inverter but uses optimizers behind each module to increase each modules output. They do this by monitoring each modules performance on a continual basis. In addition, both micro-inverters and optimizers turn the system off in the event of an electrical grid failure to comply with anti islanding legislation This is in place to protect utility workers from electrical shock while working on downed power lines. 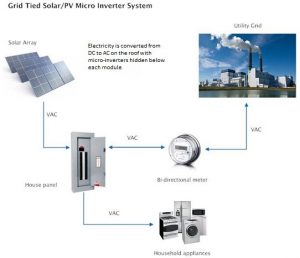 What Does Net Billing Mean?

Net billing occurs when a customer has installed a solar system. When a new system is installed, wire service providers in Alberta will change out your meter at no cost. A bi-directional meter is put in which allows for ‘net billing’ to occur. This method compensates electricity consumers who use electricity produced by their PV solar system over a certain period of time. The meter keeps track of the energy your system produces which isn’t used within your home, or business, and therefore goes to the grid. It also keeps track of what you draw from the grid, either after sundown, or in the winter when your system is not producing as much energy. When a system generates more power than it uses, customers receive a credit from their retailer. When you draw from the system you pay for your electricity as an Energy Charge. Credits are obviously much higher in the summer than in the winter.

What Is Net Zero?

Net Zero refers to a PV solar system that will produce as much energy as is used over the course of a year. During our sunny months, consumers will receive credit for the power that goes to the grid. During the darker months with less sunshine, consumers pay for the excess they draw that their system wasn’t able to produce. For example: in the evening when the sun is not powering your modules. Over the course of a year, a net zero system averages out, in other words your credits = your debits.

With a net zero system, the credits you receive in the summer should cover what you pay in the winter months – hence, net zero is achieved. 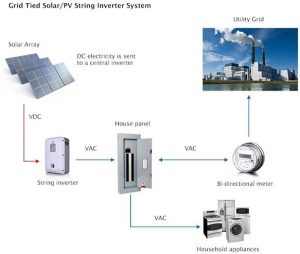 How Do Off-Grid Solar Systems Work?

Off grid systems require a battery bank in order to store the excess power that has been produced. These systems can be enhanced with an optional generator backup to ensure adequate power loads are met, if required at night, or during days of excessive cloud cover. Off grid solar systems are typically installed in remote locations, where the cost of installing utility power is prohibitive. Making the off grid option an excellent choice for weekend cabins, lodges, or remote monitoring stations. Examples of remote monitoring stations include: telecommunications, oil and gas, natural resources, and weather stations. 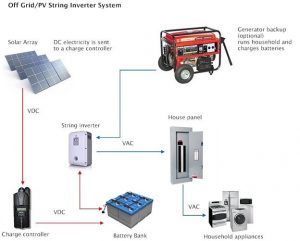